Chat with us, powered by LiveChat
Apply for an IVA
Stop creditor action and consolidate all of your debts into one monthly affordable payment – from £70 per month
get started for free

Want to Apply for an IVA? Follow This Step-by-step Guide

Looking for how to apply for an IVA – or Individual Voluntary Arrangement?

Perhaps you’re already aware of the benefits of an IVA, but don’t really know what to expect from the actual process.

We know how it is – if you’re just starting to consider applying for an IVA, you probably feel a little overwhelmed. Don’t worry – we’ve got your covered.

You could even call us right away on 0330 1228447, and we’ll be able to put your mind at ease. But if you’d prefer to learn a little more about the process of applying for an IVA first, this is the perfect guide for you. It could even help you to lower your monthly repayments and lengthen the term.

In this thorough guide, we’ll tell you:

This 8 step guide tells you every stage you’ll need to go through to stop debt collectors and start to regain control of your finances. So let’s dive straight in…

Step 1: Learn How an Individual Voluntary Arrangement (IVA) Can Help

How does an IVA work?

If you already know the basics of an IVA, then skip right to step 2! Otherwise, keep reading…

An IVA is a formal debt help solution that helps you to repay your debt through a legal agreement made with your creditors (those you owe money to).

With an IVA, you’ll agree to make a low monthly payment for 5 years (60 months). In return, at the end of the 5 years, your creditors will agree to write off all remaining balances.

Who Qualifies for An IVA?

Generally speaking, an IVA can be used by most UK residents, such as:

But there are some base requirements that you’ll need to meet:

If you’ve not already been sold on the benefits of an IVA, you’d be wise to check out our existing guides:

As always, expert advice is important here because there are also disadvantages/risks to an IVA.

If you’ve read the section above, you’ll already be a step ahead of the game!

But undertaking an IVA is a big decision and it’s important that you speak with a qualified debt advisor at this stage. A debt advisor, like us at IVA Advice, will help by providing FREE debt advice and information to make you aware of all the different options available to you.

Is IVA or bankruptcy a better option? Can a bailiff refuse a payment plan? These are the types of questions we can answer as well as saving you from having to trawl through IVA reviews online.

After this, if you decide you’d like to formally begin the IVA application process, we’ll connect you to an Insolvency Practitioner at one of our recommended companies.

Note: The IVA Scotland Process is a little different – you can read about that here.

An IVA must be set up by an Insolvency Practitioner (IP).

An IP will first double-check that you meet all the criteria of an IVA. Once that’s confirmed, and it’s determined that an IVA is indeed your best debt solution – the next step is to properly review your financial position.

You’ll want to collect this information ahead of time. 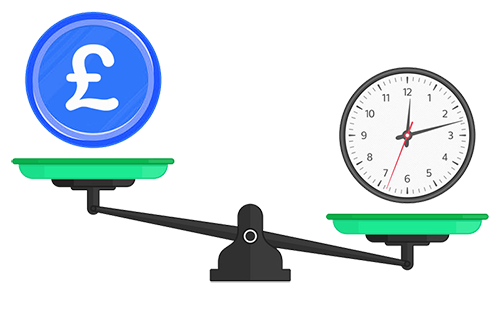 IVA UK – What Information Will I Need?

We suggest that you spend some time getting together as much detailed information as you can, regarding your regular expenses (think rent, travel, utility bills, etc).

Yes, this may take some time.

But remember that it won’t just increase your chances of securing an IVA, it’s also a great start towards developing solid budget-planning habits that can help your financial management, for years to come.

Once you’ve provided this information on your income and expenditure, you’ll know your true level of disposable income, which will be used to calculate how much you can (realistically) afford to repay your creditors on a monthly basis.

You and your Insolvency Practitioner will use this information to agree to an affordable amount, which you can repay for the term of the IVA (usually 5 years).

Important: there are employers who do not permit their employees to take out IVAs so information relating to your current employment will also be necessary.

Are your creditors aggressively chasing you for repayment?

If you’re experiencing a bailiff visiting or unwelcome home-calls from enforcement agents, at this stage it’s possible your IP will apply to the courts for an ‘interim order’, or take other action to help any upcoming court action get adjourned. This will stop creditors from taking further action against you while you’re in the process of setting up an IVA.

For many, this won’t be necessary and you’ll skip straight onto the next step – building an IVA proposal.

Next, your Insolvency Practitioner will create an IVA proposal to present to your creditors, and the court.

Key elements of an IVA proposal:

This proposal will outline your financial position and explain how much you are able to repay to the companies you owe money to. The time-frame of repayment will also be specified, usually 3-5 years.

While assets such as cars may be included in your IVA terms (to help pay more to your creditors), your IP may also suggest that where these assets are necessary for your income (such as needing a car for work), that they are not included.

Ultimately, together with your insolvency practitioner, you’ll work out a solid repayment plan that works for you.

But before an IVA is confirmed, the proposal must first be agreed to by your creditors (more on that later). This proposal will include a report from your IP that explains how likely adherence is. Basically this is your IP’s opinion on whether they believe the proposal will truly work. So while your IP will be considerate of your personal situation, it’s important to remember that you will need to offer as much as you’re able to afford.

Step 6: Your Creditors Will Consider the Proposal

Once your proposal is finalized, your Insolvency Practitioner will call a creditors’ meeting.

This could take place at your IP’s office but is more likely to be a telephone conference.

If so, your creditors will be provided with a phone number and a pin code so they can attend. This is something that you can also attend yourself, and we definitely recommend that you do!

Your Insolvency Practitioner will then present your proposal to the creditors that your debts are with, and each creditor will receive a vote.

Each creditor will receive a vote on whether or not your IVA should be agreed. The power of that vote depends on the percentage of the debt they have, within your total debt amount.

In this example, the vote of creditor 3 would be worth 45% of the overall vote, as this is the percentage of the total debt that they are owed. Similarly, creditor 2’s vote would be worth only 15% of the vote.

To have an IVA agreed, you need 75% approval.

How likely are my creditors to agree?

This depends on a few factors but will usually come down to the strength of your proposal and the perceived feasibility of the specific repayment terms.

Most creditors will already be familiar with an IVA. They’ve now been around a while as an official form of debt repayment, and IVAs are increasing in popularity.

If your IVA is approved – congratulations. You’ll now be protected against debt recovery action meaning you won’t have to deal with bailiffs. Plus, as long as you abide by the terms of the proposal, your remaining debt will be written off at the end of the fixed term.

Shortly after the decision, you can expect to receive written confirmation as well as details of how to actually make the payments you’ve agreed to.

What if my IVA proposal is rejected?

If less than 75% of creditors vote to approve your IVA, then your proposal will be rejected. If this happens then your IP will review your situation and recommend the next best steps.

This could mean that the IVA proposal gets rewritten and proposed on different terms, or it could mean that other options are discussed with you (such as bankruptcy or debt management).

If you’re concerned at this stage, you can always contact our advisors for further support on 0330 1228447.

At this point, it’s simply a matter of time and consistency.

Getting Started: Get Debt Advice (UK) & Apply for an IVA

If you’ve read this far, we’re sure you’re keen to get the ball rolling.

Applying for an IVA may feel like a big step, but we can help you along the way. Start by using our FREE online debt calculator.

It’ll only take a few minutes and you’ll receive tailored advice and direction right away. We’ll consider your specific circumstances and can help determine whether an IVA is right for you. We also know the best IVA companies and the IVA companies to avoid.

Alternatively, we’re available by phone. Call us today on 0330 1228447 and speak to one of our friendly and knowledgeable debt advisors.

Apply for an IVA Guide

Read our quick guide to applying for an Individual Voluntary Arrangement

DO I QUALIFY FOR AN IVA?

There is no particular qualifying criteria for an iva set into law. But your circumstances should fit a criteria which it would make it beneficial to you to take out an iva.

This generally means you should have:

CAN YOU APPLY FOR CREDIT WITH AN IVA?

HOW MUCH DOES AN IVA COST?